I am sure you are all aware of the tragedy that occurred yesterday at the 117TH Boston Marathon. Thank you for all your support before and throughout the race, as well as after the race upon hearing about the explosions. So many of you expressed your concern and sympathies, displaying your kindness and hearts towards all those affected by this great tragedy. 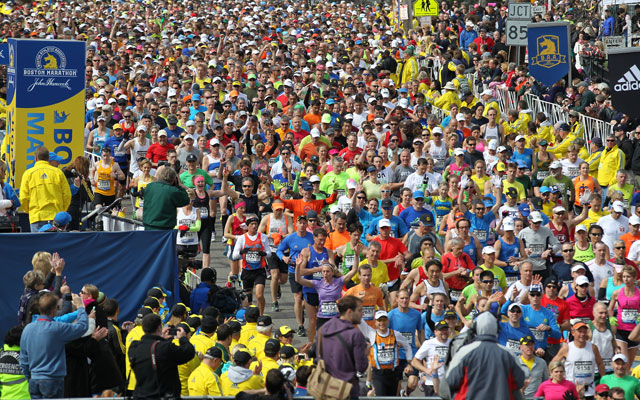 Marc and I were so thankful for missing the explosions by mere minutes, but our hearts go out to those who were not as fortunate as we were, and have lost loved ones and are waiting for others to recover. It is all so surreal still for me, and hard to comprehend. Watching the news clips and seeing footage, videos, and pictures of the explosions gives me chills. Especially knowing we were just there. It leaves me asking why?

We were blessed to have gotten off the subways right as they shut it down.  Marc and I were staying outside Boston, and were able to get home safely. However, I know that many runners and spectators were still waiting to get home or find some place to stay at 8 pm that night. We had friends that live in Belmont, MA, not too far from downtown Boston, that were about 1-2 miles from the finish when they were stopped and re-routed. They had no idea what was going on, or why they were stopped. They scattered as cop cars with flashing lights darted down the roads, not knowing what had happened, but knowing that nothings stops the Boston Marathon. Thus, they knew something terrible had to have happened.

My friend Kwankew, who was stopped 2 miles from the finish, was trying to ask other runners what was going on, and asked to use a cell phone to call her children who were a mile ahead of her, but cell service was down and she couldn’t get through. She eventually was offered a ride home, and waited for her children to get home. They arrived around 8:30.

Marc and I weren’t aware of the explosions, until I received a text from friends asking if I was ok. I was confused (an honestly wasn’t mentally alert), and Marc immediately checked his phone for news and I received a Fox News alert. Then people in the subway station started to talk about an explosion, and it was clear two explosions went off near the finish of the marathon.

After the race I was beat and sore, and not mentally alert, but upon hearing the news, I was attentive and alert. We were trying to get more information from the news on our phones, and family and friends were calling, but calls would be dropped.

It’s crazy to think that a day so iconic and celebrated by so many would have this happen. You just don’t think about anything like this happening at an event such as the Boston Marathon, or really any marathon.

It is amazing to see how well the Boston police force, medical staff, spectators, volunteers, and marathon runners responded. So many jumped right in to help, and went to the hospital’s to donate blood. The hospital’s even reported they had more than enough blood. A day that was meant to be ruined and end badly, although it was a tragedy and heartbreaking, was turned around for the good.

We, the marathon racers and running community, along with all those who supported us and volunteered, weren’t brought down, but came back full force to help. It won’t keep us from running and from helping. It won’t keep us from celebrating America, the Boston Marathon and the precious holiday, Patriots Day, celebrated by so many Bostonians.

Many have come together, wearing Boston colors or race t-shirts, in honor of Boston, and have dedicated their runs to Boston today. Moments like these give you hope. It shows the honor and respect of others, and Boston won’t feel as defeated. It shows how united our country is. People as far as the West coast are honoring Boston today; that’s inspiring.

Marc and I dedicated a morning run to victims of the explosion and to the 117th Boston Marathon. Even though it was a slow paced run, with stiff, sore legs, and it was short, I was motivated to finish for all those who may not get a second run, or another day of live. My heart breaks for those who have lost someone.  Words can’t express my sympathies and emotions. My race finish or time seems meaningless this year, but what we chose to do next isn’t.  Runners are known to persevere, and that’s just what we’ll do. We don’t have to live in fear, easier said than done, but rather celebrate every day we have, and thank God for the gift of life.

I do know that we serve a good God who works everything for Good. This gives me hope, peace, and faith. But I still feel angry and awe struck by what happened. It’s hard to understand why anyone chooses to hurt so many people, in such away, at such a place. Why the hatred? It seems like it’s an unanswered question we may never have answered.

Prayers for Boston and the victims. Run for Boston!!